Established in 2012 and located within the production studios of Full Circle Fine Art (est. 1987), near Station North in Baltimore, Maryland, the gallery fosters creative careers while working closely with collectors and institutions to cultivate a sustainable art market. Through representation of contemporary artists, as well as sponsored talks and cultural events, the gallery and studio work to build a stronger photographic community in the region with its curatorial and professional directions. 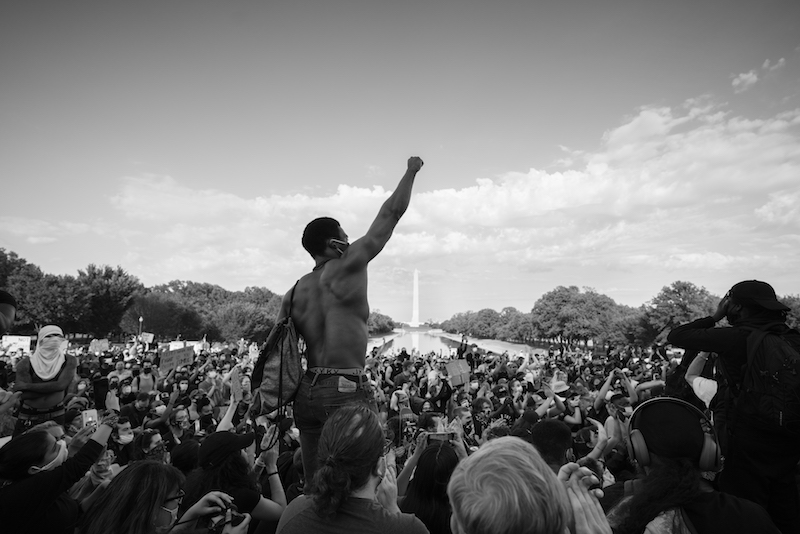 Full Circle Gallery presents Reaching for Justice, a group photography exhibition focused on the larger movement of social and racial reckoning that resulted in people taking to the streets across the U.S. in 2020. Featuring André Chung, Cheriss May, and Tony Mobley, the exhibition highlights black and white photographs that document the faces, messaging, and energy from the Baltimore-Washington region during the summer last year.

The images one display offer viewers an empathetic look and connection to the subjects, messages, and events. Reaching for Justice gives voice to the artists who, in this case, are both the subject of the work as much as the storytellers. These three artists have an enormous stake in the story – directing others eyes to the people involved, the symbols, and language of the movement and the events that shape the topics of our day. Through the lens of a documentary style photography, Chung, May, and Mobley come together in the gallery space to describe to us scenes of heartfelt emotion, the power of community, lived pain, and the beauty within truth.

Chung’s images feature figures in both a state of suspended movement: a line of marchers with their arms linked – frozen in step; a police officer and an older woman looking at each other from a distance on the same sidewalk; a striking figure lifted up from the crowd in front of the Washington Monument with his fist raised in the air. These miniature stories show us the tension of the moment and the welling of collective emotions.

May’s works depict intimate portraits of participants in the streets. Set mostly against ambiguous backgrounds, May presents prominent and monolithic figures caught in powerful moments of resolve. A solitary, young woman with her fist raised high, holds a powerful and even gaze with the viewer.  A man’s face set against a grey stretch of unlimited sky is obscured by his mask featuring an American flag – a symbol which has a stark contrast of meanings for many Americans.

Mobley’s photographs capture salient snapshots, where subjects are both the people in the street and the signs and messages they wear upon themselves. By focusing on the signs, Mobley creates a sense of containment that involves a few select characters and a wider stage at play; a pregnant couple with #boymom painted upon her protruding belly while holding a sign that states “My unborn Black King’s life matters”; a figure of a woman obscured by a mask, an umbrella, and a sign that says “how many aren’t filmed?”; and a crowd of people, some with fists raised in the air in the moment of shouting and holding various signs, with a bombardment of messages that ultimately say, we have had enough. This idea is further enforced through the use of strong clear figures in the foreground and a blurry, faded scene in the distant background.

Together these artists present a complexly woven narrative of the events, emotions, and purpose of the social outpouring in the summer of 2020. These photographs urge us to comprehend, connect with, and understand the long ongoing history of the various communities who have been reaching for justice throughout the centuries and our human responsibility to know our own roles in the American and Western systems and our abilities to fix them.

By Any Means
How Many?
Fist of Freedom
Over It
Solitude
Brotherhood
The Watch
Fighting a Pandemic
Unborn Kings
I, Too
Know Justice, Know Peace
Signs of the Times
Defiance
Rise Up
Fuck 12
Hold This Space
Black Hair is Protest
Protest Heart
I Rise
Last Generation
Into The Fray
Brother's Keeper